One of the main identifying factors for a people is food. People acquire a taste of their traditional cuisine from a young age and as adults, no matter their locations, the crave for their own food remains.

Kola Lounge is one of the places in the Detroit area where those with African and Caribbean roots can find a taste of home.

Ime Ekpenyong, whose parents are from Nigeria, founded Kola Lounge in Bloomfield off the Northwestern Freeway five years ago.

He and his partner, Tunde Adegbola, also from Nigeria, noticed the need for African and Caribbean foods in Detroit. Seeing the success of such ventures in California and Houston, they took the step to setup one in Detroit.

“We have a few African and Caribbean restaurants in the area, but nothing that brings both cultures together, and we saw the need for that, hence Kola Lounge,” Ekpenyong said.

On Thursday evening Kola Lounge was not packed full, but a party was going on.

Audrey Allen Hassen, a retired accounts executive for Comcast, and her childhood friend, Ann Jameson, widow of the late James Jameson of Motown Records, were celebrating their 76th birthdays.

Hassen said she had been coming to the lounge since it opened and was excited to celebrate an event as important as her birthday there. The friends ended the evening by presenting a large chunk of their birthday cake to Ekpeyong, whom they described as one the friendliest individuals they have met.

Kola Lounge also serves African dishes including the popular Jollof Rice and fufu along with various soups. It also plays the music of both cultures.

He said about 50 percent of the customers are Africans and Caribbeans while the other 50 percent are Americans.

Despite going extra lengths to provide authentic African and Caribbean foods, Ekpenyong feels their biggest achievement is being able to establish an atmosphere where anyone can come and have fun in the midst of other cultures.

“Anyone can come in here and eat, relax, dance and have good time,” he said. 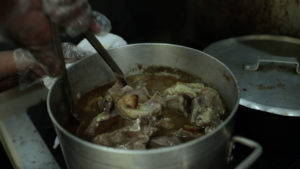